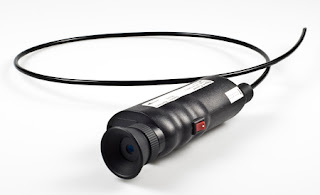 During aircraft maintenance ‘Optical technique’ is contributing a significant role to detect discontinuities on aircraft structure, components and installed engine. With the minimum part preparation this technique has proven the most effective nondestructive method in aerospace industry.
Optical instruments are widely accepted during aircraft maintenance, mainly for two reasons i) to magnify discontinuities that can not be detected by the naked eye and ii) to permit visual checks of critical areas not accessible to unaided eye and difficult for other nondestructive tests.
Several types of optical instruments are used during the specific ‘optical inspection’ technique. These are, magnifying lenses, borescopes, micro borescopes, flexible fiber optic borescopes, microelectronic video borescopes & diffracted light etc.
Magnifying devices and lighting aids are used to detect general area for cleanliness, presence of foreign objects, security of the component, corrosion and cracks or other damages.
In maintenance program Borescope inspections are reducing or eliminating the need for costly teardowns.
In this paper details description of ‘various optical devices’ and their application techniques in different areas of aircraft structure and engines will be highlighted.
Introduction: The human eye is an important element for performing visual nondestructive tests. But in many cases the human eye is not sensitive enough or cannot access the test site. As a part of maintenance program and to ensure the safety and structural integrity of aircraft, ‘Optically aided visual methods’ are frequently used, where access is poor for other nondestructive tests. Such tests includes the magnifiers and borescopes
Devices for viewing the interior of objects are called endoscopes, from the Greek words for ‘ inside view’. Industrial endoscopes are called borescopes because they are generally used in machined apertures and holes.
Probably in1946, an ultraviolet light borescope was developed for fluorescent testing of the
interior of hollow steel propeller blades of aircraft engine. The 100W-viewing instrument detected interior surface discontinuities as glowing green lines. Later in 1958 the USAF B-47 Bomber fleet was grounded because of metal fatigue cracks resulting from low-level simulated bombing missions. Visual testing with borescopes was proved the effective method for the first step to resolve the problem. In 1950s, a system was developed for automatic testing of helicopter blades. The borescope supported by long bench could test the blades while the operator viewed results on a television screen.
In 1960s Mr. Lang developed the radiation optics in a project to keep functional the borescope system in high temperature environment. He also pioneers the use of closed circuit television with borescopes for testing the inner parts of jet engines and wings, hollow helicopter blades and nuclear reactors. In 1965 a borescope was invented whose mirror could precisely controlled and this borescope could zoom to high magnification and could intensely illuminate the walls of chamber by means of a quartz incandescent lamp containing iodine vapor.
Since then various optical devices are using during aircraft maintenance.

You can find and shop for more devices using for aircraft maintenance here
Автор: Oleg Zuev No comments:
Email ThisBlogThis!Share to TwitterShare to FacebookShare to Pinterest 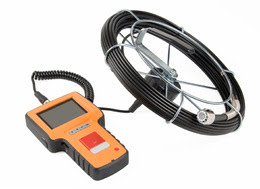 What is a push camera?
These inspection cameras consist of a long insertion probe with a flexible "goose-neck" for getting around corners.
Push cameras are used for pipeline, pipes inspection in plumber, repair of inspection work. LED lights give adequate illumination and camera on the tip capture clear images and allow image and video saving.
You can see an example of a nice pipe camera. The 26mm (1”) diameter is great to inspect wider pipes, machinery or castings, ducts, wells, or disposal areas, and industrial lines. The live color image is provided by a ¼” CMOS video camera chip in the tip. Illumination comes from 12 LED lights positioned around the camera chip protected by a solid steel head. Live images are displayed on the portable monitor.
You can review more features of this pipe camera here.