I'd like to share one wonderful news that I read recently.
One man from Skype Journal offers one of the cleverest ideas for using Skype. In short he suggests hooking up a type of a digital pen camera (endoscopic camera). The device would be able to show finely detailed objects within Skype video sessions. For example, you are selling coins on eBay. Using your Endoscope, you would be able to pan over the surface of the coin, and present it to prospective buyers in a high-resolution that would be real-time rather than a series of high-res stills that simply evoke more questions from your would-be buyer.
Автор: Konstantin Ordin No comments:
Email ThisBlogThis!Share to TwitterShare to FacebookShare to Pinterest 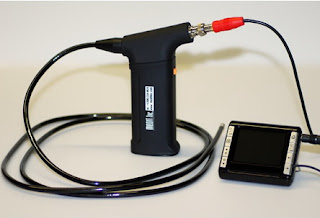 The set includes the Video Borescope with a LED light handle, RCA cable and a portable video capturing device. You can connect the borescope directly to TV monitor or use it with the portable video device. No secret how it is important to get a bright clear image of areas under inspection. A live video image is generated directly from the tip if the insertion tube, not through fiber optic cable. This solution gives you much brighter image than any fiberscope!
With the help of the video capturing device you can see real time video of your inspections and capture it for future processing, archiving or educational purposes.
Purchasing this video borescope you get everything required for portable inspections without any power cables or outlets.
Discover the World of Medit Videoscopes!
Автор: Konstantin Ordin No comments:
Email ThisBlogThis!Share to TwitterShare to FacebookShare to Pinterest


Electrical engineers at Rice University have demonstrated what they say is the world's first endoscope for terahertz imaging.
The research, which appears in the November 18 issue of the journal Nature, presents the emerging terahertz sensing industry with a unique new technology for transporting terahertz waves from a source and directing them at a particular target of interest.
"Our wave guide opens up a whole new class of capabilities because it offers a way to get terahertz energy into places it could never reach before," said lead researcher Daniel Mittleman, associate professor of electrical and computer engineering. "Wave guide technology frees you to look around corners and get into tight places."
Metals and other electrical conductors are opaque to T-rays, but they can penetrate plastic, vinyl, paper, dry timber and glass like X-rays. Unlike X-rays, T-rays are not hazardous radiation, and in some cases T-wave sensors can reveal not only the shape of a hidden object but also its chemical composition.
T-rays lie between microwaves, whose wavelengths measure from centimeters to millimeters, and light, with wavelengths measured in nanometers. The gap between - the so-called terahertz gap - contains wavelengths from 30 to 3000 microns, or 100 GHz to 10 THz when measured in frequency. The terahertz gap has been called the "final frontier" of the electromagnetic spectrum because there's never been an easy or cheap way to either generate or measure T-rays, something that's only begun to change with the advent of new technology in the past decade.
The development of "wave guides" is a key element in the technical maturation of T-ray technology. Wave guides - like fibre optic cables for lasers and coaxial cables for microwaves - allow energy to be moved and directed where it's needed. This is particularly useful if the beam generator is bulky or temperamental.
Both fibre optic cables and coaxial cables work by confining the energy of the beam in a small space, causing it to propagate down the cable.
But coaxial cables aren't good guides for T-waves because the metal sheath absorbs T-wave energy very quickly, and fibre optics don't transmit T-waves. By blending some aspects of both these technologies, Mittleman's team devised a system to guide T-waves in and out of a confined space.
Mittleman and his student, Kanglin Wang, stumbled upon the idea for the wave guide when they noticed T-waves were moving down a wire during an experiment on a new form of terahertz microscopy. In follow-up experiments, they found they could move T-waves along a bare wire, direct those waves onto a surface, catch the reflected waves on another wire, carry those reflected waves back to a receiver and analyze the return waves to reveal information about the surface the original wave was shined upon.
"There are lots of places where T-waves would be handy but where they're difficult to use today," said Mittleman. "Free-space beams are notoriously temperamental - a shortcoming that's kept them off of some factory floors - and our endoscope technology has the potential to change that."

To see more information about current products for industrial endoscopy go to Fiberscope.net

Автор: Konstantin Ordin No comments:
Email ThisBlogThis!Share to TwitterShare to FacebookShare to Pinterest

The US Naval Air Systems Command (NAVAIR) has awarded a contract to Pratt & Whitney to provide maintenance support for Rolls-Royce Pegasus F402 engines that power AV-8B Harrier fighter aircraft flown by the US Marines.
The follow-on contract is for high-pressure compressor blade repairs using blendable boroscope technology that can be applied without removing the engine from the aircraft. The equipment is made up of a borescope with miniature-grinding tools and another borescope equipped with a video camera.
The grinding tool is inserted into an engine through a servicing port and guided to the site of the damaged blades. Once found, the blades are ground smooth to restore their strength.
To repair damaged blades on a typical aircraft, the engine has to be removed from the Harrier, requiring up to 850 hours of labour and costing as much as $500,000.
With an average of 30 engine removals per year, NAVAIR estimates that the process could allow 83 more weeks of aircraft usage per year, potentially saving more than $10 million in maintenance costs.
Pratt & Whitney's latest agreement with NAVAIR follows a one-year contract where Pratt & Whitney supplied these services for Harrier aircraft flown by the US Marines from 2001-2002.
The follow-on contract is for one year (2002-2003), with options for two additional years. If fully implemented, the agreement would be worth over $2 million to Pratt & Whitney.
Borescopes allowed for inspection of Pratt & Whitney engines can be found here
Автор: Konstantin Ordin No comments:
Email ThisBlogThis!Share to TwitterShare to FacebookShare to Pinterest 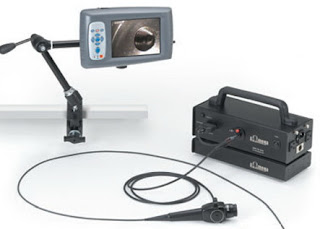 Medit Inc presents a new powerful Alpha-V1 videoscope system as best solution to all of your inspection needs. Videoscope has many advantages and it pays for itself. The Alpha-V1 gives you a portable system that is lightweight to improve inspection time. The videoscope system provides high resolution still or moving images which help to improve detection any flaws. This system is a complete system with picture and video capabilities. You can save them to a CompactFlash™ memory card. Then you can download images to your computer for archiving or data processing. A carrying case provides a complete protection for your Alpha-V-1 video system. 24 watt Metal Halide light source gives you a bright image. You can view pictures on a large 6.5” TFT display. The diameter of probe is 4 mm, and with its 2000 mm length the system can reach the most difficult places for inspection.
You can find more professional videoscopes to choose from here
Автор: Konstantin Ordin No comments:
Email ThisBlogThis!Share to TwitterShare to FacebookShare to Pinterest

How To Select Borescope and Fiberscope

1. You have to select a diameter of the scope that will fit in the smallest diameter access hole or port you intend to inspect.

2. Then determine the correct length. This distance is how far inside the borescope or fiberscope must reach to provide full inspection viewing. Do you have access to both ends of the assembly or piping? (purchase a scope that is 1/2 the length needed) Is the access only from one end? (Full length). Then compare the fiberscopes we offer to find closest matching borescopes. Rule of thumb: Longer better then shorter.

4. Do you need that scope has ability to articulate a tip while you doing inspection ? Or if you need to pass complicated corners or tubes. If so, choose an articulated flexible borescope (fiberscope) or videoscope.

5. Define the area being inspected and unknown condition. Will you have enough light at a given distance? Will the light reflect internally (polished surface) or will it be absorbed (coal black or carburization). Will you be close enough for proper magnification or far enough away for overall viewing?

6. Define how close the scope tip will be from the area of interest. The closer you are, the increased magnification you achieve. The depth of field of most borescopes is huge compared to many other lens systems. Most scopes stay in focus without adjustment from a couple millimeters from the tip all the way to infinity. The common working range is within 1-2mm from the tip to approx. 5"-6" away.

7. Will the test results need permanent documentation from still photos or video? If so, you will need a scope with this capability either a videoscope or rigid borescope or flexible borescope (fiberscope) with a video kit.

Since you decided what device is convenient for your job, you can go and shop for rigid borescopes here, and portable video scopes here.
Автор: Konstantin Ordin No comments:
Email ThisBlogThis!Share to TwitterShare to FacebookShare to Pinterest
Newer Posts Older Posts Home
Subscribe to: Posts (Atom)